In 1977, as a new undergraduate student at the Mumbai Institute of Science, I came as close as I have ever come to having a religious experience. My algebra teacher, the late great Professor Vasant Shankar Huzurbazar, related to us the famous quote from the German mathematician Kronecker: “God made the integers, everything else is man’s doing.” “Except we don’t need God,” Hazurbazar declared. “We can also make the integers ourselves, that too, out of pure emptiness!”

To prove this, he set the vacuum equal to zero and then, for any number, used set theory to define its successor. It was like lighting the fuse of a chain reaction: one came from zero, two from one, three from two; suddenly, an explosion of numbers seemed to erupt in the classroom. I felt the walls around me dissolve, the ceiling above me split apart, to reveal waves of numbers flowing through time and space. The whole experience felt cosmic, like I was at the dawn of creation – that’s where the title of my new book, The Big Bang of Numbers, comes from.

Now, many people would associate creation with a supreme being. Brahma explodes the universe with a single breath, the Biblical God shapes the cosmos during the first six days of Genesis, the ancient Egyptian deity Atum summons the world from a sea of ​​chaos. The more scientific among us might associate creation with physics: the universe emerges from a singularity of infinite density in the Big Bang. Mathematics, which is so abstract and so independent of physical reality, seems an unlikely candidate.

And yet, Professor Hazurbazar’s construction came closer to the ideal of creatio ex nihilo, or “creation out of nothing,” than either religion or physics. In religion, you have to assume the existence of a supreme being, while in physics you need a singularity. In mathematics, all Professor Hazurbazar used was a version of nothing called the empty set.

Fine, but that only deals with the numbers. Is mathematics capable of creating something else? That is the question I began to consider decades later. Could construction be continued and the universe built using only mathematics?

There were good reasons for conducting such a thought experiment. Mathematics often remains in the shadows, never getting the kind of exposure that religion or physics enjoy. Why not have it go out and prove its value in the arena of public discourse, in a non-technical, easy-to-understand way? Even if the construction was ultimately unsuccessful, continuing would reveal just how intricately mathematics is woven into the fabric of our universe.

And maybe with the addition of just a few extra ingredients, we could succeed! Let’s note here that God and physics also need those extras; for example, both playfully use numbers, without creating them.

So what would be our next project after creating the numbers? If we start with complete nothing, then we would have to deal with something that is rarely talked about: empty space. Keep in mind that space, even a vacuum, is different from pure “nothing”. God certainly takes that space for granted, creating heaven and earth without the slightest mention of any prior preparation to set up the empty stage. As mathematicians, we cannot be as joyful as God. We are aware of the need for a matrix of locations to house all of these creations, so it behooves us to fill this gap.

More than two millennia ago, the Greek mathematician Euclid postulated that between any two points there is a straight line and, furthermore, that this line can extend indefinitely in any direction.

This gives us a recipe for creating space. Start with two points and (assuming Euclid’s postulate holds) you can get an infinite line; add another point, and it turns out that you can draw a series of lines that form a plane; add one more point and you can generate a multitude of parallel planes that stack up to form three-dimensional space.

Interestingly, the Russian artist Wassily Kandinsky used a similar point-line-plane progression to map the surface of his blank canvas.

The above construction is quite easy and intuitive (for more details see my book). The thing to keep in mind is that with just a couple of extra ingredients, a few points, plus Euclid’s postulates, mathematics can build an empty space. Actually, you can do a lot more: you can also create various alternatives to this space!

In fact, mathematics makes us wonder if there really could be dimensions higher than reality. In case this idea sounds too far-fetched, keep in mind that superstring theory requires space to have at least nine dimensions, and there have been other physical theories that posit that our universe may be a lower-dimensional facet of a reality of top dimension (just like an edge or face is a lower dimensional facet of a block).

There is more: mathematics also allows us to build a curved space! Do you remember Euclid’s postulate that we used? Well, if one replaces “straight line” with “circular arc”, then instead of lines coming together to form a plane, the same construction will give you circles coming together to form the surface of a sphere. Not only that, but substituting “straight line” for other types of lines gives you several other surfaces, including the frilly “hyperbolic” ones so often found in nature (for example, in corals). 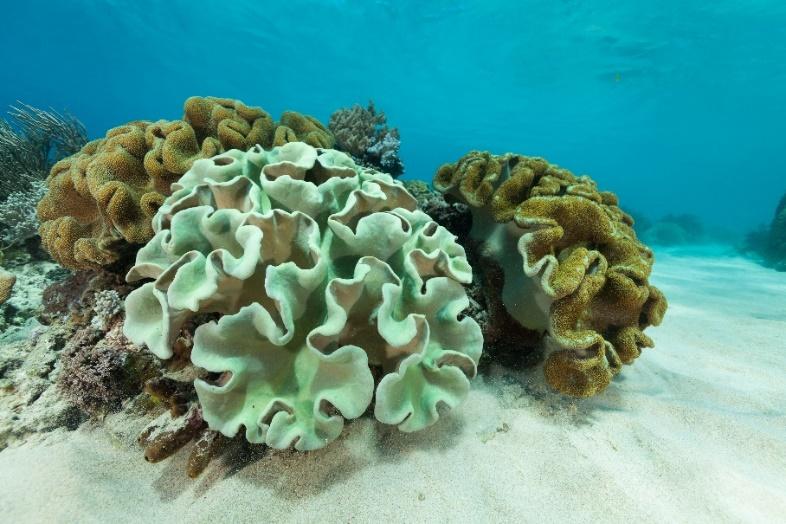 As before, mathematicians have been able to extend such ideas to higher dimensions, thus constructing (theoretically, at least) “curved” versions of three-dimensional space. Lest you dismiss this as too abstract or academic to be of practical interest, keep in mind that Einstein, in his General Theory of Relativity, proposed that our own space-time is curved, a fact that has been verified experimentally. 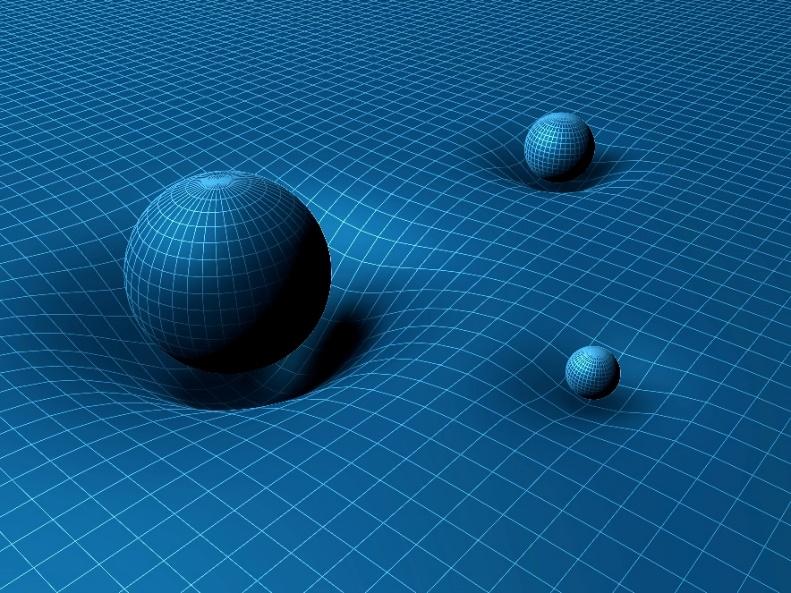 Let me pause at this point to ask a fundamental question. Mathematics is often understood as something that humans create to solve problems and describe the universe; for example, Newton’s invention of calculus was inspired by a desire to analyze motion. Consider, however, curved geometries like the hyperbolic manifold, which mathematicians discovered in the 19th century, after centuries of abstract thinking. It wasn’t like they were trying to model corals or other sea creatures, nor were they anticipating that Einstein would use his discoveries decades from now. So how is it possible that the esoteric and brain theories of mathematicians have found such profound applications in nature?

In fact, there are several similar examples: ellipses, first formulated by the ancient Greeks, turned out to be the correct paths for planetary motion; logarithmic spirals appeared in nautilus shells and galaxy formation; group theory, developed to abstractly describe symmetry, proved to be the perfect setting for quantum mechanics; the abstract theory of knots appeared unexpectedly in the modeling of DNA. What explains this “unreasonable efficiency” that mathematics has to describe the universe, as the Nobel laureate Eugene Wigner put it?

There is one obvious possibility: that mathematics is not man-made but, as Plato believed, exists immutably and independently of us. That mathematics is the intelligence behind the universe, the “Vishnu” so to speak, that keeps everything running and orderly. Instead of formulating mathematics to try to describe the patterns we see around us, it is mathematics, embedded like DNA, that is responsible for creating the patterns in the first place. That’s why corals and other marine creatures could adopt a hyperbolic geometry half a billion years before we humans had any idea of ​​it.

While one cannot make an airtight case for it, accepting this inversion of perspective makes various natural phenomena easier to interpret. Think of the mathematics that provides a variety of shapes, equations, and laws of behavior from which all the components of the universe can be built. This does not necessarily contradict the belief in a supreme being. God can do the implementation, but he relies on math to draw up the blueprints.

So, getting back to our math construction, what’s the next thing we should help God (or physics) with? Let’s say we have already created a catalog of standard geometric shapes like triangles, squares, circles, etc. These will suffice for many purposes, but various other applications, such as cloud boundaries or air duct branching, will need more complication. interfaces called fractals. Such patterns, where similar designs occur at different scales, often appear spontaneously in nature, for example on shell surfaces. 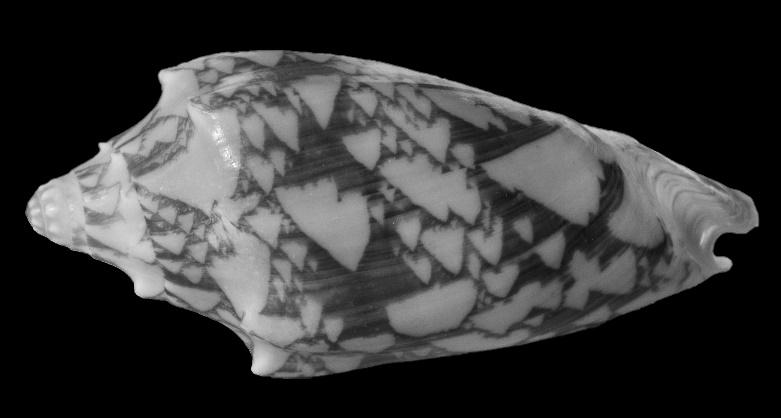 Despite its complexity, we can generate these types of images using very simple rules, such as: For each black triangle, color its central quarter white. Suppose you start iterating, using the old output as the new input to which the rule is reapplied. Notice how quickly you get a shape where the boundary between black and white becomes very complicated. Also, how the pattern on the shell is similar to what you get now, but just with a healthy dose of randomness mixed in!

The above type of input/output rules, where the output of the previous step serves as the input of the next, gives us insight into many evolutionary processes. For example, consider a coastline that evolves in a series of such snapshots under the influence of the tide. Erosive forces have similar effects on both large and small scales, which is why most coastlines end up looking like fractals.

There are many more mathematical steps we can take to make the universe more of a reality. Eventually, however, we are faced with the most difficult question of all: how to create life? Surely that requires a divine spark, far beyond the capabilities of mathematics.

Scientific theories often say that the first living matter was formed from the right kinds of molecules that randomly interacted billions of times. What mathematics does bring, through the example of input-output rules and fractals, is the insight that remarkable shifts in complexity can occur, from simple rules to complex outcomes, from inanimate molecules to living cells.

Perhaps, as Professor Hazurbazar said, we don’t need God after all. Maybe math can make everything come alive from a vacuum.

(Manil Suri is a distinguished professor of mathematics at the University of Maryland, Baltimore County, and author, most recently, of The Big Bang of Numbers: How to Build the Universe Using Only Maths.)