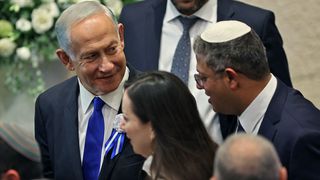 Several American Jewish leaders during a meeting with Israeli officials earlier this month warned that racist and extremist movements in the new israeli government could seriously hamper support for Israel among Jews in the US, six sources who either attended or were briefed at the meeting at Israel’s embassy in Washington told Axios.

Why it matters: The incoming government of Israel is expected to be the most right wing of all time. A senior Israeli official said the embassy meeting represented the anxiety the organized American Jewish community has about the incoming Israeli government over its expected policies toward Jews in the Diaspora and against democratic values.

Driving the news: The representatives of the Jewish organizations were invited to a meeting with Shuli Davidovich, head of the Israeli Foreign Ministry’s office for the diaspora, who asked to hear his thoughts on the political situation in Israel, according to the sources, who requested anonymity. to talk. freely about what was discussed at the meeting.

a set of concerns it was related to religious pluralism and potential changes to the Israeli “law of return” and Jewish conversion law that could negatively influence the American Jewish community.

Behind the scenes: Meeting participants told Axios that several of the Jewish representatives said that policies that are racist, antagonistic to both reform and conservative Jews, and harm LGBTQ+ rights could harm donations to Israel from the US Jewish community. Such policies could also push the country’s younger Jews to distance themselves further from Israel.

Status of the situation: The new Israeli government, with Netanyahu as prime minister, is expected to be sworn in on Thursday.

The coalition agreement between Netanyahu and his associates included many clauses that have already created a public stir, including the passage of a law that will allow certain companies to discriminate against gay people on religious grounds and the cancellation of a law that prohibits racists from running for office. .

What to see: Representatives of the Jewish organizations said during the meeting that they would like to meet with Netanyahu after he takes office to discuss their concerns directly with him, the sources said.